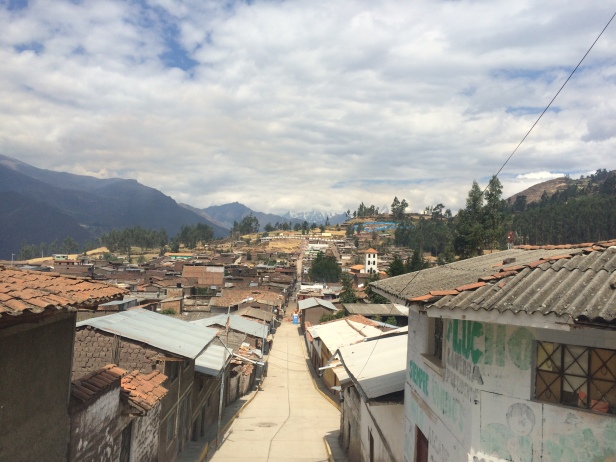 It’s official! I’ve been in Peru for over a month! I spent the last week doing field based training in Ancash, a picturesque region of Peru known as “Mirror of the Sky” full of tall snow capped mountains, valleys, and lakes. Ancash is also home to Artesonraju, a pyramidal mountain peak that inspired the Paramount Pictures logo.

Along with the other of the Youth Development Volunteer, I took an overnight bus from Lima on Sunday at 11 pm. Fortunately, the bus was quite comfortable with large reclining seats complete with blankets and pillows so I was able to get some sleep on the way. Around 6:00 am I was abruptly awakened by the bus stewardess ripping my blanket off and snatching up my pillow shortly after we arrived in Huaraz, the capital of Ancash.

From the bus terminal in Huaraz we took a taxi to our hostel, “Cayesh”, where we had just enough time to check into our rooms and change before it was time to leave for the Regional Government where we had breakfast and met some of the key socios in the community. After listening to a brief presentation about Ancash we headed back to our hostel where we had language class and as one of our activities we had to find out how to play traditional Peruvian games so we went out in the community and talked to people and asked them to teach us how to play them. While on my quest I met a couple of alpaca friends in the plaza which pretty much made my day. 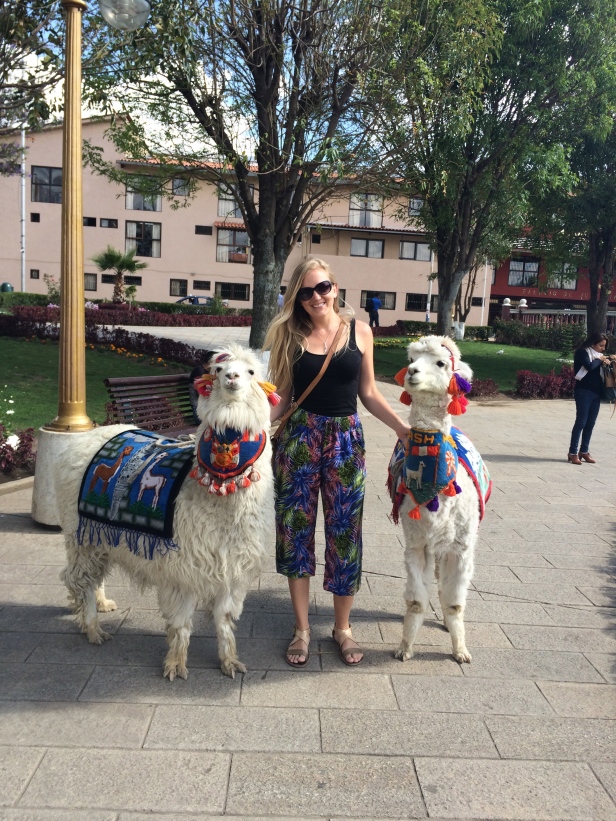 After language class, we saw a interesting presentation on intercultural classroom management by Profesora Luz Alamo. She spoke about the children in the Sierras and the importance of raising their self-esteem of and making them feel loved.

For dinner, a few of the other volunteers and I found a nearby restaurant that served pizza and Mexican food. I ordered vegetarian tacos with tofu, which were pretty good but had a bit too much oil. It was a decision I later learned to regret because I was sick the entire night and well into the following morning.

On Tuesday we went to a multigrade school in Carhuaz, about an hour away from Huaraz. There we worked with a group of 23 students between 10-14 years old and did a lesson on self-esteem. During the activity, the students shared some of their dreams and I was both surprised and saddened when one of the young girls in the class told me that her dream was to wash clothes. Overall though the class went well and as I was getting ready to leave many of the students asked for my “autógrafo” and all gave me hugs goodbye. It was really sweet.

That night I didn’t get much sleep because outside my window there was a huge music festival and fundraiser going on. It actually sounded like a lot of fun and they were playing all sorts of popular cumbia songs but the next morning we had to be out and about by 6 am so I had to miss out.

On Wednesday morning we went to Yungay, a town about an hour away. There we visited the municipality and spoke with the Director of Social Development. After that a few of the female volunteers from the group and I checked out the market and got followed by a homeless man who I’m pretty sure had some kind of mental illness. He was dressed in all black and had wild black hair and was mumbling something that we couldn’t understand. We eventually lost him when we ducked into a café to have lunch.

That afternoon we left Huaraz and took the bus for a 2 hour to Chiquian where we checked into Hostel “Los Nogales”. There was courtyard in the middle of the hostel with a big garden filled with all kinds of flowers and there was a big friendly German Shepard who lived there. I was also pleased to find there was hot…well, warm water.

Thursday we went to the small colonial town of Huasta, which also happened to be the site of fellow Peace Corps volunteer, Kevin. We began the day around 6 am by doing house visits in the community followed by visits to the health post and the school. I made several new animal friends along the way. Afterwards we met with the mayor of the town and he spoke to us about Huasta and its youth. He said that one of the problems of the community was that its youth don’t have any dreams or goals. 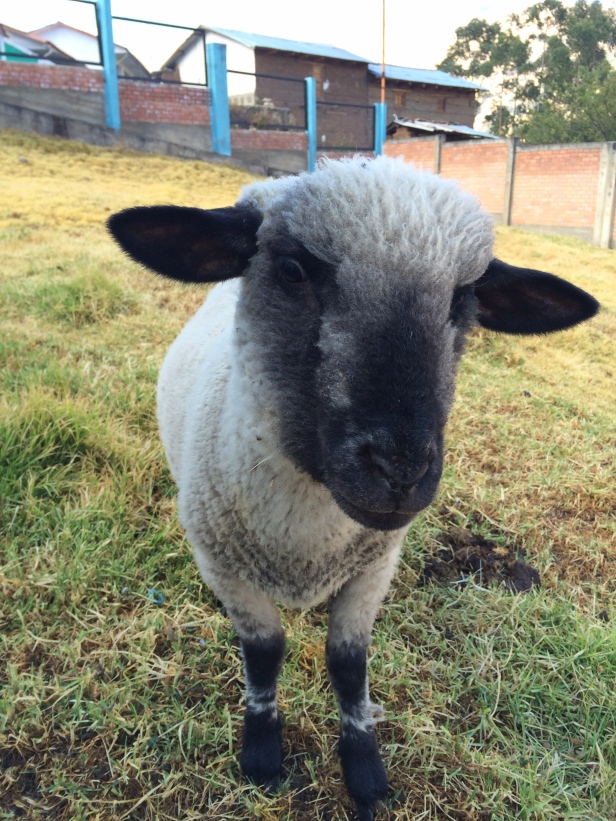 We had lunch at Kevin’s house and his host mom cooked pachamanca for all of us. Pachamancha (“earth pot” in Quecha) is a traditional Peruvian dish made with potatoes, sweet potatoes, and some kind of meat such as chicken, beef, pork, llama or cuy (guinea pig). Hot rocks are heated in a fire and then put into a hole in the ground creating a natural oven to cook the pachamanca. Seeing how the pachamanca brought me back to the time my friend from New Zealand showed me how to make a Hangi (Maori earth oven) while working at an English language camp in Argentina. The pachamanca was delicious and I couldn’t believe the amount of food we were served. I had to sneak a few potatoes back in the pot when nobody was looking. We finally finished somehow when all the sudden, Kevin’s host mom came out and began distributing large bowls of soup to everyone. I knew that there was no way I could possibly eat anymore so I went and hid in the bathroom while it was being passed out and fortunately nobody seemed to notice that I didn’t have a soup. 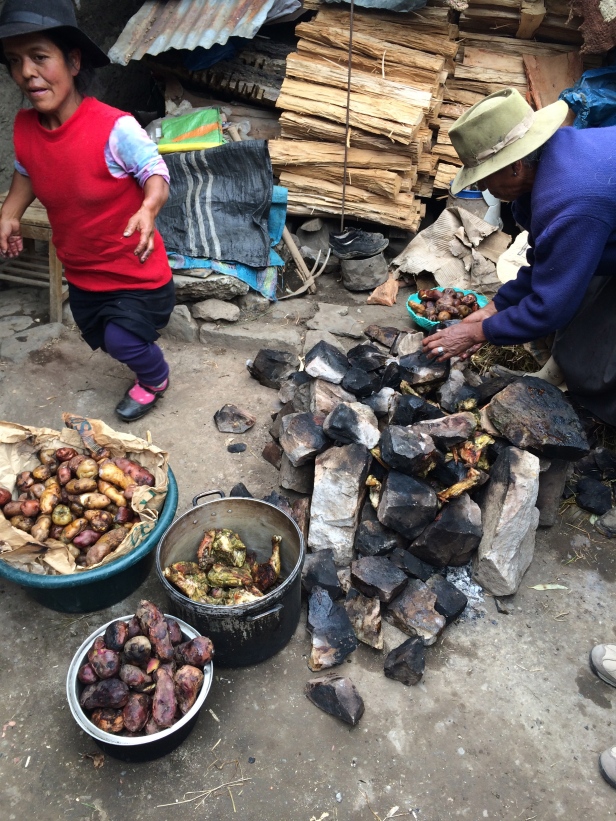 After lunch we headed back to Chiquian where we visited another school and the UGEL (similar to a school board). For dinner we decided to get Chifa (Peruvian Chineese food) and we were pretty excited about it. We ordered a few Wonton soups to go and also placed and order for the next day’s lunch. We were enjoying the soups back at the hostel when all of the sudden one of the girls that was eating with us screamed “Oh my god!” We all looked over to see what was the matter and there on her spoon was a small white worm. She threw the worm to the side and tried again. The next spoon also contained a worm. We tried to convince ourselves that it was just her soup that had been infested but sure enough we found worms in our soups as well. At that point we decided it was time to go back to the Chifa restaurant, to ask to get our money back and cancel our food orders for the next day. When we confronted the people working at the restaurant and showed them the worms we had found in the food they didn’t seem the least bit surprised and informed us “the worms were from the broccoli”. In the end, although we were only able to get our money back for 2 of the 5 soups we had ordered, we were refunded for food order we had made for the following day.

We left Chiquian on Friday and headed back to Huaraz where we took another overnight bus back to Lima. Although I enjoyed my time in Ancash I was happy to be heading back “home” to Chaclacayo. It will only be my home for a short while longer, however, because in 6 weeks I move to my new site, and this Wednesday I’ll know where!