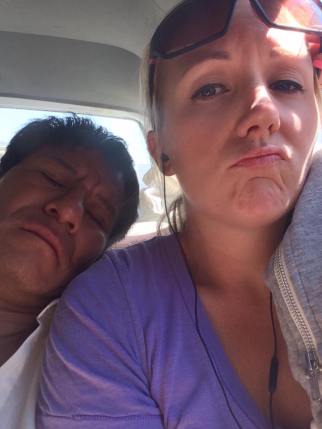 In Peru, whenever I leave my community, I catch a combi. Catching a combi, or ride share, is pretty much hitchhiking. You just walk out to the main street, extend your arm and with a flick your wrist, a car stops to pick you up. There aren’t any taxis or buses that leave from the community, so unless you hop on a passing tour bus, taking a combi is really your only option.

A combi is pretty much just a guy driving his car (usually a station wagon) up and down the main street, beeping his horn, and yelling his destination out of the window. He drives around, picking people up until the combi “fills up”, AKA having four or five people squished in the back seat, two passengers in the front seat. Sometimes there are even a couple of people in the trunk. The driver will often times have to close the door for you because everyone is packed in so tight. The whole process freaked me out a bit the first time but now, es normal (it’s normal), and doesn’t phase me in the least.

With the blazing Magdalena sun beating down on the car and no air-conditioning, it’s a hot ride with sweaty bodies pressed against you on either side. People get on the combi with just about anything such as bags of squealing guinea pigs or cackling chickens. One time, the woman sitting next to me had a live goat in her market bag with just it’s head sticking out, staring at me.

On the rare occasion that the driver is in a hurry and there aren’t many passengers, he may leave with fewer passengers, and it’s possible that you could have only one other person in the backseat with you- I refer to this as combi ridin-first class! It usually doesn’t last too long, however, as the driver starts picking up random people along the way on side of the road in the middle of nowhere.

Even if you are fortunate enough to have only one other person in the back with seat you, often times when they fall asleep, their head somehow finds it’s way to your shoulder. I’m a person that really values my personal space, and don’t really like strangers intruding into my personal bubble, so when some unknown man’s head ends up on my shoulder, with his body pressed against me (even though he has tons of space on his other side), I will move my arm abruptly to wake him and shake him off. It’s pretty effective for about fifteen minutes or so, until they fall back asleep, so I just repeat the process. I often find myself wishing I was wearing a track suit lined with spikes on the outside to keep people from pressing up against me. Maybe I’ll design one. I realize this may come off as a bit negative, but hey, it’s not all rainbows and unicorns. Each day has it’s challenges and for be, not having personal space is definitely one of them.

Some days, there aren’t any combis so you just catch a ride with any vehicle passing by. One time, I caught a ride with a truck driver in a massive 18-wheeler. I was sitting with a woman at her kiosk on the side of the road as I waited for a car when we saw the truck approaching. I stretched out my arm and waved my hand, signaling to the truck that I wanted a ride when the woman chimed in: “He’s not going to take you.” “We shall see..!” I responded. And sure enough he stopped right in front of us and I hopped in the front seat. We chatted a bit during the ride and he told me about his family and about the time he was sleeping in his truck and someone came along and stole the battery and tires. He said that kind of stuff doesn’t happen in Cajamarca because it’s so tranquillo (calm).

When I first started taking combis or catching rides from my community, I used to say to myself, “there’s a 50% chance I’m getting kidnapped right now”, and if I were back in the states, I probably would’ve been right. In the Sierra culture, however, is much different from the urban one I was accustomed to. It’s a much more quieter and laidback lifestyle in the Sierras, one in which people give rides to strangers, because that’s just what they do, because they have a car and others don’t, and there isn’t that fear of “stranger danger” that exists in the US. Most people don’t have cars here. There aren’t taxis or public transportation. Some people have mules, but they will only take you so far. And that is why, combi ridin’ is how I get around.