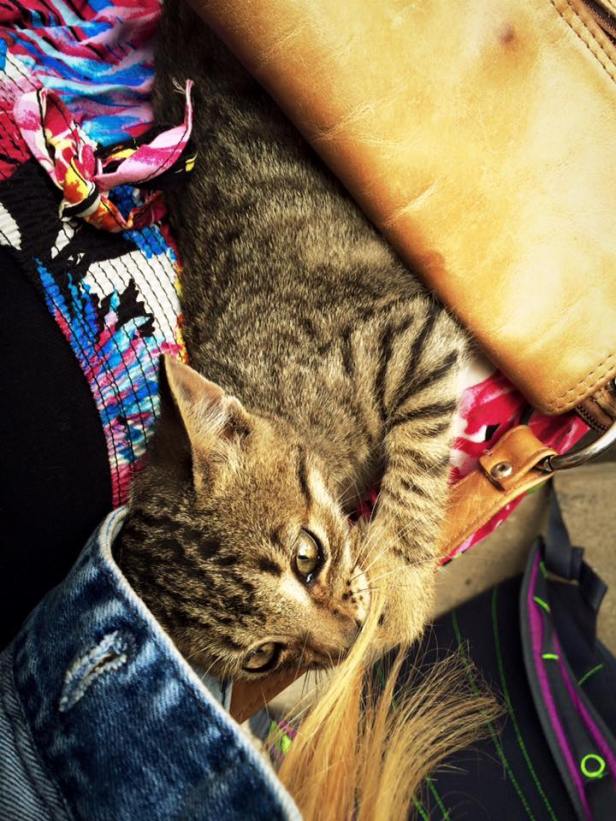 As I waited for a car that was going in the direction of San Juan I sat on a red plastic stool on the side of the road by my friend Lucinda’s kiosk (I had met her a few days earlier while buying water and ended up staying and chatting with her for a good 45 minutes). She had recently adopted a 3-month old kitten, Panchito, so I passed the time by playing with him and letting him try to eat my hair and bite my hands. Eventually I was able to find a car and we were on our way.

About 10 minutes into the trip a campesino woman got into the car and sat down next to me with a large bag. Not long after, the bag began to move and a squealing sound started to come from within the bag. It was then I realized that the woman was carrying a bag full of live guinea pigs. I tried to take a picture but I could do so she had been dropped off on the side of the road in the middle of nowhere and then proceeded to walk down the mountain. That’s pretty typical here.

I think the bag of guinea pigs had distracted me from how fast the driver because when I started to pay attention it was actually quite scary. He kept going into the other lane (on a one-lane road) to pass the car in front of him, but since the road is so windy, you can’t tell when another car is coming until the last minute. I thought we were going to have a head on collision at one point when all the sudden another car appeared from around the bend. My heart was in my mouth as the driver SLAMMED on the breaks, but yet, somehow, the old woman next to me was still sound asleep. 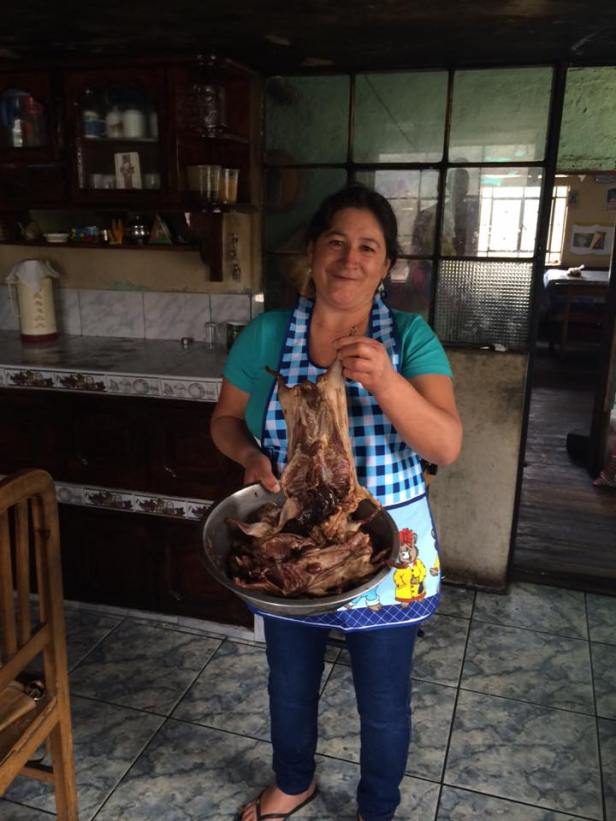 Fortunately I made it all in one piece to San Juan, just in time to try my first cuy. I was pretty nervous about eating an actual guinea pig; I’m not going to lie, especially after growing up and having them as pets (shout out to Katherine, Laddy and Elijah Guinea Pig), but it was her birthday after all, and she tells everyone I’m her hija (daughter) so I was willing to give it a try. 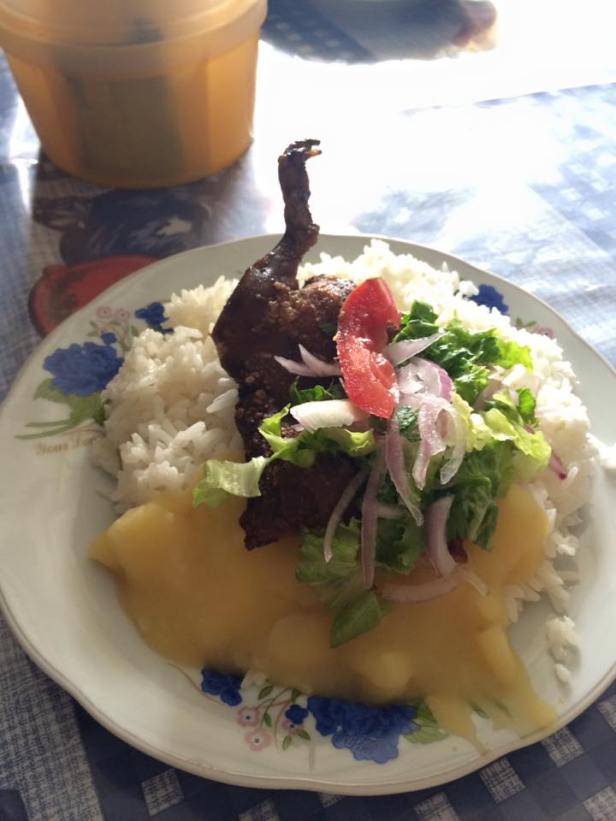 I sat myself down next to the smallest piece of cuy, but I had a hard time getting over the small foot and claws protruding from my plate, which seemed to be reaching out for help. In the end, it wasn’t as bad as I had thought and just tasted similar to chicken but with a thicker skin. I commented to the family that I used to have guinea pigs as pets in the U.S., and his host dad asked me, “so eating cuy is like eating a dog?” –Yeah, I guess you could say that, I responded, but I immediately regretted it when nobody laughed and they just looked at me with a serious face. I made up for it later though by telling them about various misunderstandings I’ve had when I didn’t know the local jerga (slang). 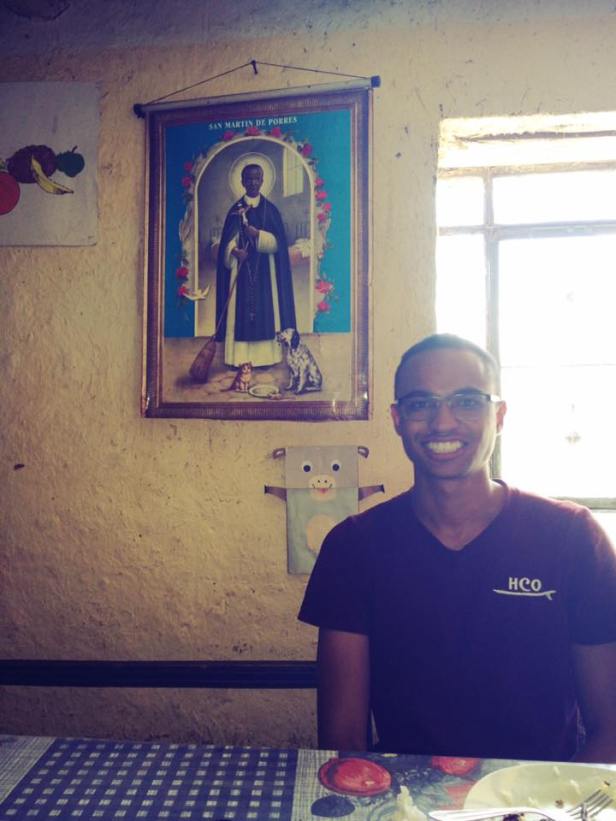 As we were eating, I happened to notice a painting of a black saint hanging behind Richard (who is also darker skinned) as he was eating and laughed to myself, “they probably hung that there before he got here to make him feel more welcome.” I didn’t want him to take it the wrong way so I didn’t share my joke. Seconds later, it was if he had read my mind because he said, pointing to the painting, “they hung that there when I got here.” He was joking obviously. It was too funny.

We spent the afternoon joking with the family and around 4 pm we all went outside to find me a car back to Magdalena. Over the next hour, very few cars passed, and the ones that did either weren’t going through Magdalena, or as Richard’s host mom said were too atrevido (daring), like in the case of the truck carrying a bunch of tree trunks. She joked about me getting kidnapped and said “they’ll take you straight to Lima, and I’ll never see my sweet Sarita again…” Finally, just when the situation seemed hopeless, a blue sports car appeared and stopped in front of us. “A Magdalena??” (To Magdalena) she asked, and we waved for me to get in the car. The windows were tinted and there weren’t any other passengers in the car, but by that time my options were limited to I got into the car and hoped for the best. Richard took a picture of the license plate as we drove off, just in case…

It wasn’t long before the car was really started to pick up the pace, flying around the corners so fast that I found myself holding onto the seat, and even closing my eyes at times. I reached down to try and put on my seat belt but to my dismay there wasn’t one…probably covered up by the seat cover. I felt like I was on a roller coaster, only not as safe and going around a mountain cliff. “Doesn’t it scare you to drive so fast?”, I asked. –I’m driving, slow, he responded. “If this is slow, I definitely don’t want to be in the car with you while you’re driving fast” I replied. He laughed but kept speeding away. We arrived in my community in half the time it usually takes, and fortunately, without flying off any cliffs. When I asked him how much I owed him, he told me not to worry about it and then sped away. 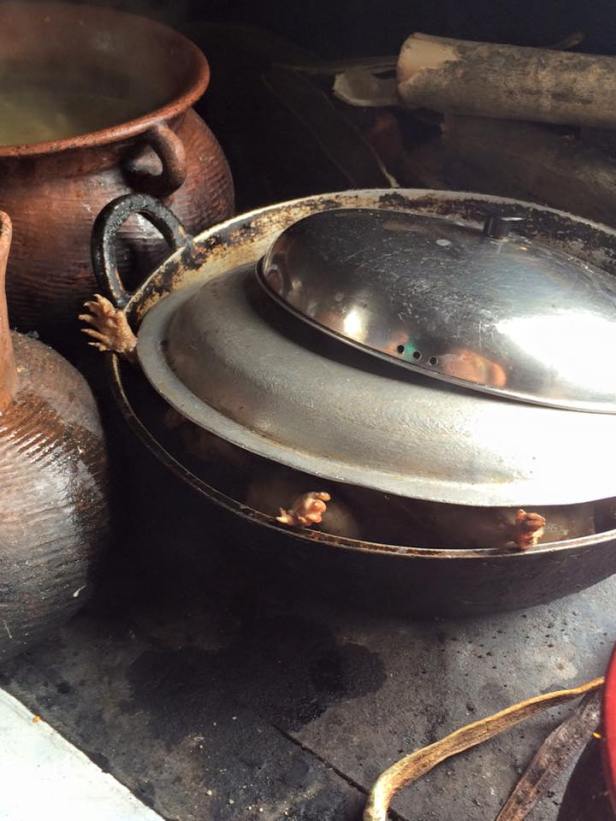