Last week was quite the action packed week with my host dad’s birthday on Wednesday, Thanksgiving on Thursday, the high school Fiesta de Promoción on Friday, and my host grandmother’s birthday on Saturday. In fact, I think I’m still recovering from it all.

On Tuesday night around 10 pm I was on my way up to my room to unwind and get ready for bed when my host mom called out to me,

“Sarita, are you going to bed already?”

She made a face and then said “Because the party starts at midnight.”

Confused, I asked her if she was serious, but I could tell by her expression that she definitely was and without hesitating she responded,

“Yes, all of the family is coming over at midnight!”

Dang I thought, I was looking forward to reading my book and going to bed early, but instead I headed back up to my room to change for the party.

An hour an a half later, various family members started to trickle in the door until there were about 15 or so in the dining room and they were blasting cumbia that could be heard all over the community. Everyone sat down at the table where we were all served giant bowls of caldo or chicken soup filled with rice. Since I had just eaten dinner not too long ago, and it was about 85 degrees, I didn’t feel much like eating a huge hot bowl of soup, but I ate it any way. I had just barely finished when my host aunt asked me if I wanted seconds. I politely declined.

“She doesn’t like rice!” My host dad announced to room.

Everyone stared at me as if I had two heads, for in Peru, rice is pretty much eaten at every meal, and “a meal without rice, isn’t a meal”. Fortunately, my host family has started to accept the fact that I’m not a huge rice fan so they didn’t push it. I stayed up long enough to have a piece of cake, around 3 am and then snuck off to bed.

The next day the party resumed around 9 am and the house was quickly filled with dozens of family members, friends, and neighbors. I sat down at the dining room table where my host mom proceeded to tell everyone that I had a friend, Richard, who looked “exactly” like Obama, so much so, that he got a free taxi ride out of it. There were a few moments of silence and then my host grandfather smirks and says “heh heh, Richard Obama…” and then proudly adds, “today the president of the United States is coming to have lunch with us!” Everyone laughed.

Not long after “Richard Obama” showed up and we joined in the cumbia and huayno dance party in the next room. I ended up later putting on my Zumba video per my host mom’s joke/suggestion and ended up doing Zumba with the host dad. It was quite the scene.

Much like the previous day, the party went on until the early hours of the morning. I was both shocked and impressed that everybody still had energy and ganas to be social by that point, but as I’m quickly learning, that’s just how it is in Peru. 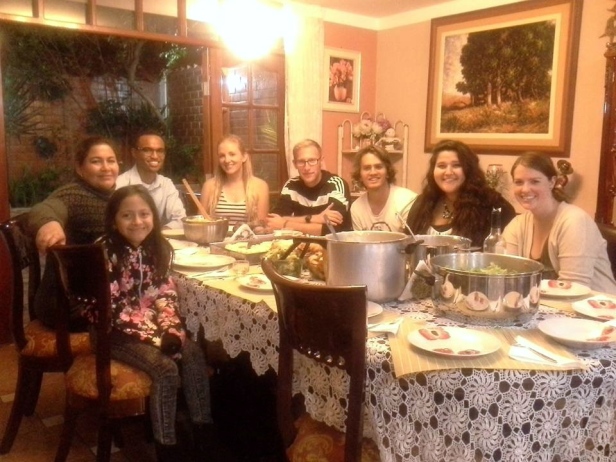 On Thursday I celebrated Thanksgiving in Cajamarca city with some of the other Peace Corps volunteers who live nearby. I got to the city around 2 pm where I met up with the other volunteers and we did some shopping in the market to buy ingredients for our much-anticipated Thanksgiving feast. We then went back to fellow volunteer, Alexander’s house to start cooking. After a few hours of slaving away in the kitchen we had produced a beautiful Thanksgiving dinner complete with home cooked macaroni and cheese, mashed potatoes, a large fruit salad, vegetable salad, garlic bread, corn bread, banana bread, chocolate cake, chocolate rice (complements of Richard), and a baked chicken, since we couldn’t find a turkey. During dinner, we all went around the table to say what we were thankful for. I shared this: “It’s always hard to be away from home and family during the holidays, but I’m thankful for having this opportunity to share Thanksgiving with my new Peace Corps family and friends.” <3.

Saturday was my host grandmother’s birthday and people started to come over around 9 am and started cooking lunch, cabra (goat). While everyone was busy in the kitchen (I asked and they didn’t want my help) I kept busy by doing zumba in the living room with my host cousin who’s in her 20s and goes to school in Cajamarca City. Every so often someone would peek their head around the corner and watch us. Afterwards, one of my host aunts asked me if I could come over to her house the following week to do Zumba with her and I said sure.

As we sat down for lunch I said to my host mom “La semana que viene voy a Chilete para hacer Zumba con last tías” (next week I’m going to Chilete to do Zumba with the aunts). The entire room erupted in laughter. I wasn’t really sure what was so funny, but I laughed too, which made them laugh even harder. Then my hot mom asks me

“Sarita, do you know why we’re laughing”

“Because in Chilete, there are two “women of low morals.. you know prostitutes, who come to Chilete every Tuesday and do their thing…” (we all laugh).

“Well, they are welcome to do zumba too!” I respond. (they all laugh again)

After lunch everyone started to partake in a “drinking circle” which is basically just what it sounds like, everybody sits around in a circle and passes around a giant bottle of beer and a cup and drinks it until it’s gone and then  they get another bottle and start again. I didn’t much interest in participating, and fortunately, neither did my host cousin so we escaped with her little sister and went on a hike up the mountain and back. Along the way the little sister, my “host niece” sang songs from the movie Frozen to me in Spanish because apparently I look like the main character, Elsa. At the top of the mountain we found a house that had a backyard full of baby chicks, ducks, turkeys, which we stopped to play with. It made my day.