This past week was our Early In-service Training (EIST) in Chaclacayo, about 45 minutes from Lima. I stayed with my old host family in Morón, which is about a 40-minute walk, or 5-minute combi (bus) ride. It was nice to be back again. I had really missed my host mom, and her amazing homemade desserts. She had a crema volteada (similar to flan or caramel custard) waiting for me when I got there.

I arrived on my birthday, March 6th and not wanting to inconvenience the family, I decided not to tell them it was my birthday. Somehow, however, it came up in conversation that I was a year older than the last time they had seen me and they immediately began to worry that they had missed my birthday.

“Your birthday is in March, right?” my host mom inquired.

I laughed and nodded.

“SARITA!! Why didn’t you tell us?! What were you thinking?! We would’ve had a birthday cake and present ready for you when you got here, and we’d be out on the corner with everyone to greet you!” she exclaimed.

I smiled. “Don’t worry, it’s a gift in itself just being about to spend my birthday with you.”

“Don’t be silly!” she interjected. “Wait a minute.” And with that she ran off into the other room.

When she came back, she was holding two unopened Victoria’s Secret lotions. One was coconut scented and the other one was called “pure seduction”.

“Pick one”, she said, handing me both tubes.

She explained that her son had brought them back from a trip to the United States and despite my protests, insisted that I take one.

“I’ll leave you with the pure seduction” I said, taking the coconut lotion and setting it aside.

Before going to bed that night she asked me what my favorite dessert was.

“Great.” “Then I will make you brownies for your birthday and tomorrow night we will celebrate.”

I smiled and thanked her as I headed off to my room. It hit me then how much I had missed her kind spirit.

Sure enough, the following evening she had made a fresh batch of brownies for me and had invited all of her friends over to celebrate with us. 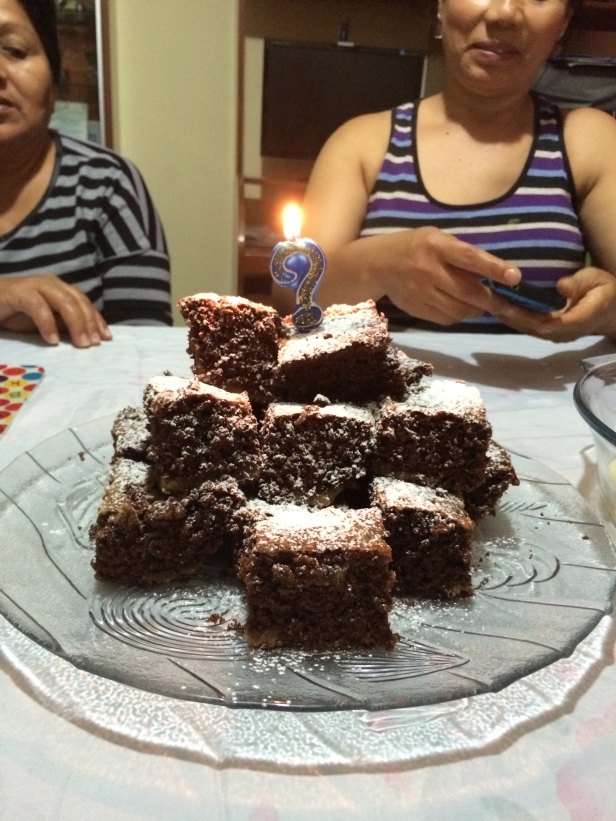 The following morning training began at 8 am. The day was full of interesting sessions that consisted of topics such as empowering girls and boys in the classroom, health and nutrition, intercultural competencies, and strategies for integration and communication. We also had sessions on more technical issues such as our project framework, developing youth and counterpart portfolios, among others. I was pleased to find that we were given daily coffee breaks in which snacks such as fruits and peanut butter, empanadas, and alfajores were provided.

Everything was going smoothly until Tuesday afternoon when I began to feel a painful throbbing in my gums on the upper right-hand corner of my mouth. As the day progressed, so did the pain until it was almost unbearable. At that point I decided it was time to call the Peace Corps doctor.

The PC doctor scheduled a dentist appointment for me that evening in Lima, about an hour away from the training center. At the end of the day, I caught a ride with some of the staff that was headed back to Lima and they dropped me off at the dentist’s office.

Several minutes of painful poking and prodding later, the dentist informed me that I had an abscess on my gums that was likely caused by a root canal gone bad and now the infection was in the root of my tooth. He told me that the infection was pretty serious and referred me to see a root canal specialist. He prescribed me some antibiotics and painkillers sent me on my way.

Friday was the last day of training and at the end of the day a bus picked everyone up and brought us to Lima. I had originally planned to travel back to Cajamarca by bus that night but I was told by the medical staff that I needed to stay through Tuesday to see the root canal specialist. 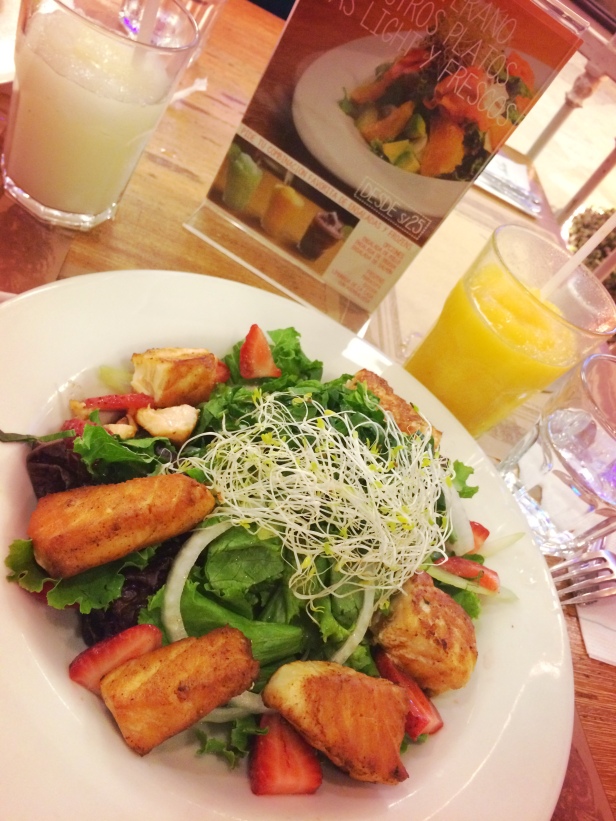 That weekend, I stayed at Friends House, a hostel in Miraflores and took advantage of all of the delicious foods available in the area that I missed from home. I made must’ve paid a visit to Pinkberry to get frozen yogurt just about every day. I topped my fro-yo with raspberries, blueberries, and shredded coconut, all of which I hadn’t eaten since the last time I was in the U.S., 7 months ago. It was glorious.

The chicken schwarma with hummus and pita I found at the Middle Eastern restaurant was also quite memorable.

Friends House is just a few blocks away from Larcomar, a fancy mall on the beach. There were also various paths where you could find people running, rollerblading, walking, and biking. It was refreshing to see people exercising again and leading healthy lifestyles, something that unfortunately is not too common in my community in the Sierras. 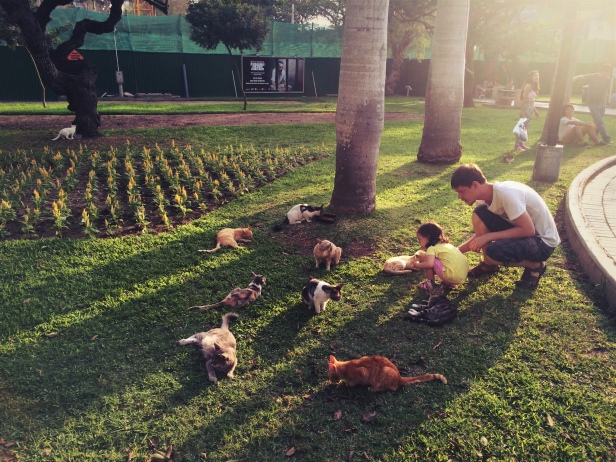 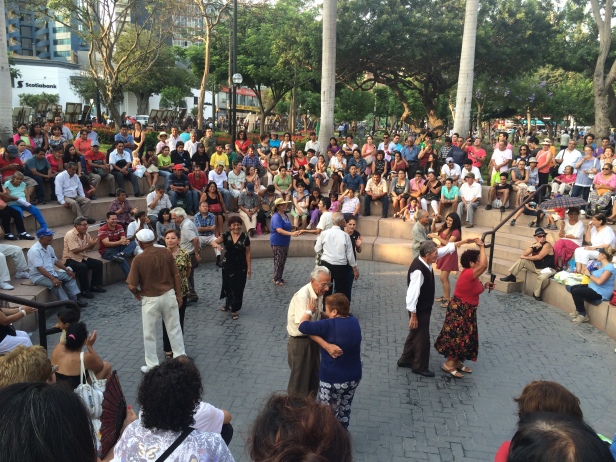 Another highlight of being in Miraflores was Parque Kennedy, or as I like to call it, “the cat park”. There you can find dozens and dozens of cats roaming freely. I liked taking my fro-yo to eat on the benches of the park while I visited with the cats. One day I found that there were even people salsa dancing in the park. I thought about joining them but it seemed to be some sort of senior citizens dance group so I decided I better not.

Monday finally rolled around and I went to see the root canal specialist. He confirmed what the dentist had previously told me and after looking at the x-rays informed me that an “exploratory surgery” was necessary to get rid the infection and to look for any further damage. My heart sank a little upon hearing the news but I was relieved knowing Peace Corps reputation for excellent medical care and that I was in good hands.

Taking advantage of the fact I was already in Lima I also went to see an orthopedist for some pain and discomfort I had recently begun to experience in my knees. After examining me the orthopedist informed me that I have Patellar Chondromalacia, or an abnormal softening or degeneration of the cartilage of the underside the kneecap (patella). He told me that I had an abnormal shaped patella undersurface and that I should avoid activities that require me that would put pressure on my knees such as squatting, leg presses, walking up and down stairs, hills or inclines. I knew immediately that this would be a challenge considering I live in the highlands and my community is full of hills and steep inclines.

I returned to Cajamarca the following day to be present for the regional meeting and my site visit. I was told that I would have to return the following week, however, for my dental surgery.

2 thoughts on “Training and Tooth Terror”