On Tuesday night, around 8 pm my cell phone rang. I didn’t recognize the number but I picked it up anyway. I thought it might be one of the Peace Corps doctors. You see, I have an upcoming dental surgery scheduled and I was expecting a call about it, but it wasn’t them. It was a doctor who was calling, it just wasn’t my doctor, it was Blackie’s.

“Yes, this is the veterinary office calling to remind you that Blackie was due for his second round of vaccinations today.”

I paused. Not knowing what to say. “Yes, I know…” I finally managed to respond.

“When will you be bringing him in?” the voice on the other end pressed.

“Well, that’s the thing…” my voice trailed off. “Someone took Blackie….and I don’t know where he is.”

Monday, June 6 was the day that I was supposed to bring Blackie to get his second round of vaccinations. I knew I would not forget the date because it was also my brother Alex’s birthday. Only instead of bringing Blackie to the vet, I was explaining to the vet’s office why I couldn’t bring him, and why I may never be able to bring him to continue his vaccinations. Because Blackie was gone. 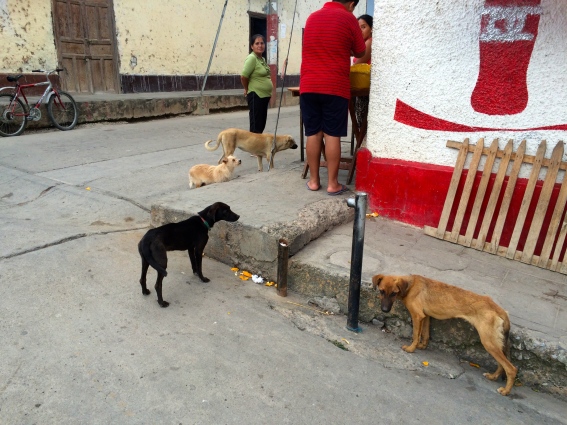 About a week ago I discovered that Blackie was not in the house. I figured he was just outside the house, over by the anticucho stand, waiting for scraps to fall alongside the other dogs in the community as he often did. But he wasn’t there.

I thought he might have gone over to my site mate, Jan’s house, as he often did, but he wasn’t there.

I thought maybe he might be over by the municipality or the school, as he would accompany me to work every day. But he wasn’t there either.

I looked everywhere for Blackie, only he was nowhere to be found.

He had never run away before, it wasn’t like him. And if he did wander off at times, he would always come back. Always. This time he didn’t, and he still hasn’t but that doesn’t mean I’ve stopped looking for him, or given up on the hope that I’ll find him, although with each passing day that he’s gone it feels more and more unlikely that I’ll get him back.

Blackie was, is undeniably one of the sweetest creatures I’ve ever known. He actually reminded me a lot of my dog Cassie, the black lab I had growing up, who lived to be 14 years old, and was very much a part of the family. Cassie passed away in 2007, and Blackie was the first dog I’ve had since then.

Blackie is a special dog. Not just because of his sweet temperament or that he reminds me so much of Cassie, but because I found him on Mother’s Day. Mother’s Day has been a particularly difficult day for me ever since my own mother passed away suddenly two years ago. A part of me felt that by finding Blackie on Mother’s Day was somehow symbolic, somehow meant something, as if he were an angle sent to me, to take care of and to love.

Yes, Blackie was, is (I hate to use past tense) a special dog, that’s for sure.

I love how whenever I would start petting him he would immediately drop the front part of his body into my lap to be petted while his hind legs remained standing.

How he would always talk to me as if trying to have a conversation.

How he would always cry whenever I would come back and he had been left alone in the house.

I love how absolutely adorable he looked in that camouflage fleece pullover I bought him for chilly nights in Cajamarca.

I’m not sure what really happened to Blackie or if the story I was told has any merit. I just hope that wherever Blackie may be that he’s taken care of, and that he’s not in any pain or suffering. I miss you sweet boy.  You’ll always hold a special place in my heart. ❤