Each year my community has an annual celebration honoring Saint Maria Magdalena, the saint for which my community is named. This year the celebration took place from July 11-24, each day boasting a wide range of events and activities

People came from all over to partake in the celebration. Vendors set up shop along the streets selling anything and everything from clothes and kitchen accessories to chickens and guinea pigs. I was actually on the verge of buying a small grey chicken with a very sweet temperament but I wasn’t sure how my host family would feel about me just keeping her as a pet so I resisted the temptation.

On Saturday and Sunday July 16-17 the community hosted an “agricultural, gastronomical, artisan, and industrial” fair which included the presentation of the world’s biggest chancaca (sweet sauce made of raw unrefined sugar from sugar cane), live music and dance performances among other events.

On Monday morning the community hosted a “marathon”, which was actually a 10 k, and I decided to sign up. After all, first place winners received 300 soles ($100), and I had maybe only seen one other person running in my community, so I figured I had a pretty good chance.

The race was scheduled to start at 9 am and I arrived about 15 minutes beforehand. To my surprise, there was only one other person there.“Where is everyone?” I asked the man who was also waiting for the race to begin. “Dunno” he shrugged. “Well, that’s ok, first prize and second prize!” I exclaimed pointing at us both. He laughed.

Almost an hour later, a few more participants had trickled in for the race but I had begun to grow impatient. When I went to inquire about the starting time I was told “maybe 10:30 or 11”. That was it. I wasn’t going to wait around anymore and decided to leave and find more productive use of my time. I was a little disappointed about not running in the race but by that time the sun was already blazing and I had lost my motivation.

On Wednesday night there was a marinera competition in which couples of all ages performed until the early morning hours. It was quite impressive show.

Thursday night there was a Grupo 5 concert, which I’d have to say was my favorite. I had seen them in concert once before in Virginia, and it was every bit as much fun as the first concert.

On Saturday and Sunday there were bullfights but I opted out of attending, because if I did it would only be to protest, and somehow I don’t think that would go over very well with the community.

The celebration ended with a parade in which I got invited to participate, marching alongside the high school teachers and students. I was told it would start at 7 am sharp. Figuring it would start late though, (la hora peruana) I took my time in the morning and showed up fashionably late around 7:45 am. When I arrived, however, there was only one other person there. I had a brief moment of déjà vu as my mind flashed back to the race day. We both waited for an hour and a few other people showed up but nobody seemed to know what time the parade would “really” begin.

I said I was going home to eat breakfast and afterwards called to check in with one of the teachers to see if there was any word on the start time. 9:30 am she told me. So at 9:45 am I headed back. More waiting. Each time I asked about when it was going to start the answer was “ya ahora va a empezar (it’s going to be starting now)”. From previous experience, I knew this could really be any time so I gave up asking and just tried to wait as patiently as possible. 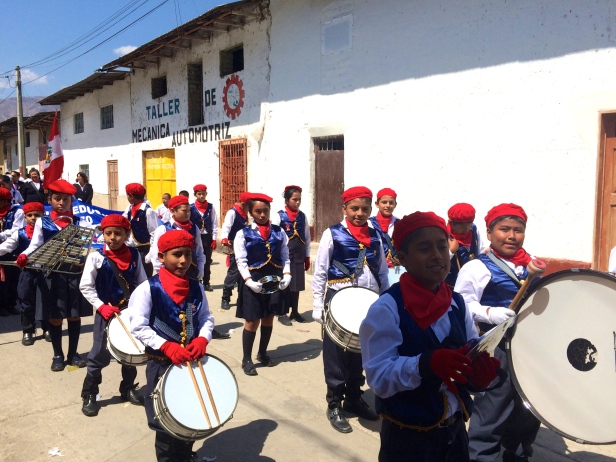 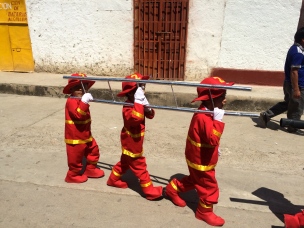 The parade finally started around 11:30 am and after a long speech and a bunch of standing around we were finally on our way, marching past the plaza de armas. Although I was feeling a bit frustrated from all the waiting, seeing all the kids proudly marching in their costumes and uniforms made it all worth it.